In many ways, the coffee industry is only just beginning to explore the potential of ⁩التخمير in creating high quality coffee. From outrageously long fermentation times, to inoculating coffee with unusual cultures, producers around the world are finding ways to exploit ⁩التخمير — both generate unusual and interesting cup profiles, and also to improve consistency.

One producer who has built a reputation for creating seemingly impossible cup profiles through their ⁩التخمير methods is Diego Bermudez, owner of Finca El Paraiso. Diego has developed a unique processing method that allows him to manipulate the flavour of his coffee, using only the mucilage and the microorganisms found in the coffee. Diego uses a multi-stage process to isolate and control the different phases of coffee ⁩التخمير — even to the extent of carrying out part of the ⁩التخمير away from the coffee beans themselves. The resulting coffees have incredibly intense, fruity flavours that push the boundaries of what coffee can taste like.

After several years of experimentation, Diego, with his company Indestec, is working on commercialising this unique process and the equipment used to achieve it. We spoke to him to learn how his process works, and how it can generate such a wide range of cup profiles.

The story of the process begins with Diego’s coffee farm, El Paraiso (Paradise), high in the mountains of Cauca, Colombia. This close to the equator, there is little seasonal variation in the climate. Instead, the conditions depend on altitude, and the effect of cooling winds coming in from the Pacific Ocean. At around 1930 metres (6300 feet) above sea level, the climate is cool and humid, and the coffee cherries ripen slowly, creating plenty of sugar for ⁩التخمير.

The first step in determining the cup profile of the coffee is choosing which cherries to harvest. Depending on the desired outcome, Diego and his team might harvest just as the fruit ripens, to create lots that consist of 90–95% perfectly ripe cherries. For their ‘Red Plum’ lots, however, they deliberately pick overripe fruit.

The longer the tannins, polyphenols and esters in the coffee pulp remain in contact with the seed, Diego says, the stronger the red fruit notes in the final coffee become.

After picking, they clean the fruit of any impurities, then send the cherry to a floatation tank, where they bubble ozone through the water. The ozone disinfects the cherry surface, reducing the amount of wild microorganisms in the tank so that they can tailor the ⁩التخمير for each lot.

After floating the cherries, they screen them by size for ripeness, and then load them into stainless steel bioreactors. They flush the tanks with carbon dioxide to remove any oxygen and create an anaerobic environment for the first ⁩التخمير step. The anaerobic environment encourages the growth of yeast, which create alcohols and acids that are important precursors to the coffee’s flavour. The lack of oxygen also prevents the للأكسدة of flavour compounds present in the coffee pulp when the cherries start to break down.

As the ⁩التخمير progresses, the gases released cause pressure to build up inside the sealed tanks, which according to Diego, forces some of the aromatic compounds into the seeds.

As the cherries break down during the first ⁩التخمير step, they release some of their juices, which are collected in separate tanks. These juices are key to the unique isolated ⁩التخمير step in this process.

The second ⁩التخمير step begins with selecting the right strains of yeast and bacteria for the ⁩التخمير. Over six years of processing coffee, Diego and his team have selected and saved numerous different strains of native microorganisms from their coffee cherries, creating a library of cultures to use in fermentations.

Each culture that they have isolated was selected for its particular sensory characteristics — for example, to produce their ‘Red Plum’ lots, they use a yeast culture that produces large amounts of fruity esters, aldehydes and alcohols during the ⁩التخمير process.

Once they’ve chosen the mix of cultures to use, they first grow it in a culture medium, to increase the number of cells available for ⁩التخمير. Once the culture is up-scaled, they add it to the coffee cherry juices released from the first ⁩التخمير step. 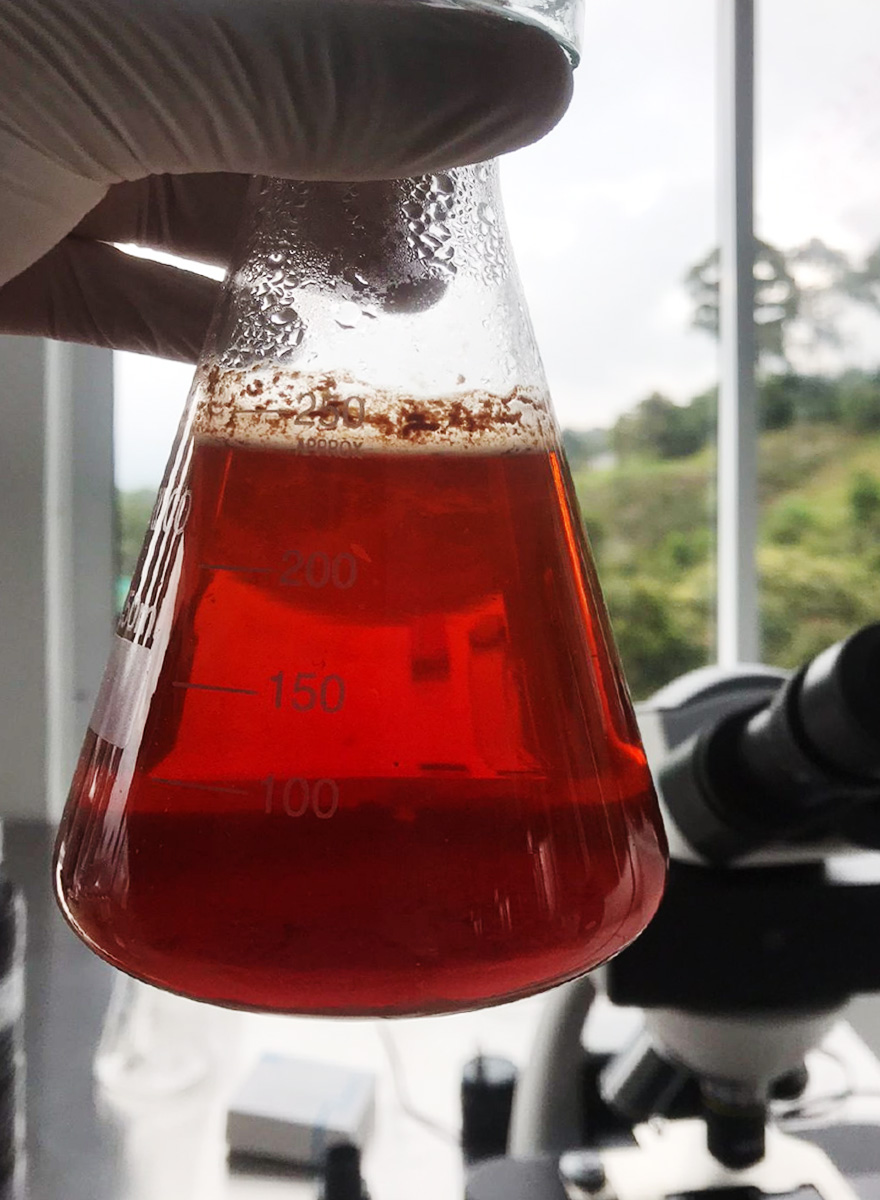 They then use these cultured microorganisms to ferment juices and mucilage from coffee cherries in a separate bioreactor, converting the sugars in the pulp into the esters, aldehydes, and alcohols that generate the coffee’s distinctive fruity flavours. This second ⁩التخمير step uses only cultures and materials derived from coffee cherries, but is completely isolated from the coffee beans themselves. Once the culture is ready (left), it is used to ferment coffee pulp and juices in stirred-tank bioreactors (right)

The team can monitor and control the conditions inside the bioreactors to follow the progress of the ⁩التخمير and stop it at the precise moment that it is ready. They test the pH, temperature, carbon dioxide, and alcohol levels, and even the number of yeast or bacterial cells found in the culture. For example, Diego says, when the alcohol levels start to drop, it’s an indication that the cultures are starting to produce acetic acid and this may be a sign to stop the ⁩التخمير. 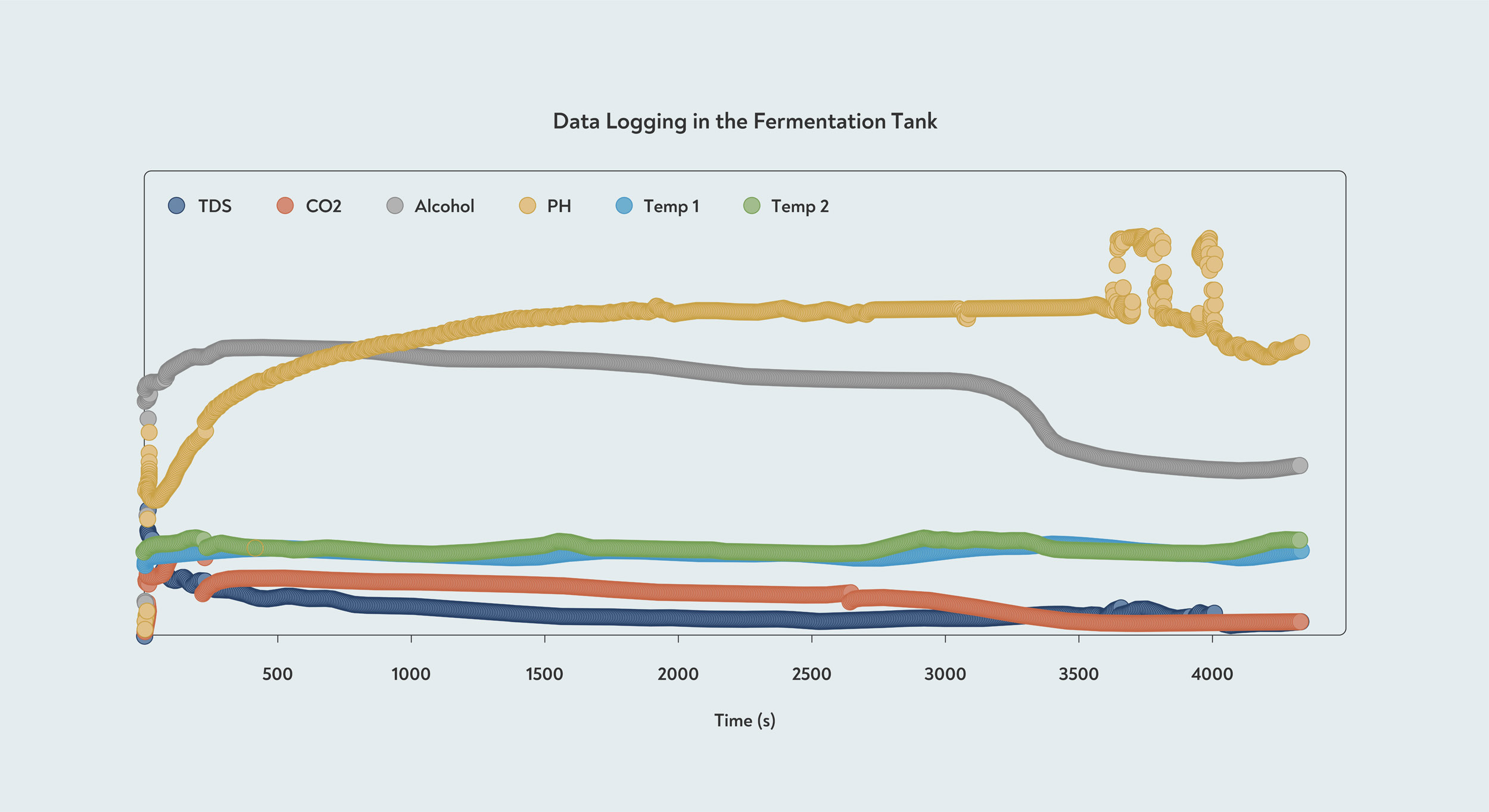 Data logging in the ⁩التخمير tank. The drop in alcohol levels towards the end of the ⁩التخمير indicates a switch to acetic acid formation.

Once the culture is ready, the coffee cherries are depulped and the seeds, mucilage, and ⁩التخمير culture are all loaded into a tank for a final ⁩التخمير step. Since the culture itself is created using coffee mucilage, this ⁩التخمير can contain fruit pulp from more than one lot of cherries.

This ⁩التخمير step is again carefully controlled, and takes place over as long as 120 hours. The tanks are continually stirred to ensure the beans and pulp circulate, and the pressure is again allowed to gradually build up to around 20 psi (1.4 bar) in order to drive aroma compounds into the beans.

The final step in the ⁩التخمير is a thermal shock, a technique Diego pioneered. The temperature in the tank is briefly increased to 40 °C, to open up the pores in the parchment and silverskin and allow flavour compounds to penetrate the beans. The beans are then washed with cold water at 12 °C to clean the parchment and rapidly cool the beans.

After washing, the beans are dried in a special mechanical dryer that uses a dehydrator coupled with low temperature carbon dioxide or nitrogen to gently remove the moisture. In the dryer, the beans aren’t exposed to oxygen, and the flavour compounds aren’t destroyed by heat. “The drying process is crucial to guarantee the final quality of the coffee,” Diego says. “Many of the compounds generated in the ⁩التخمير are highly والمرَكبات العضوية المتطايرة, and some thermolabile, so it is essential to create a careful drying process… this allows the coffee to last longer without losing its sensory characteristics over time.”

The results in the cup speak for themselves. The coffees produced with this method have pronounced حموضة and intense fruity and floral flavours ranging from red fruits, to passion fruit, to rosewater, depending on the cultures used.

To understand how the fermentations create such distinctive flavour compounds, Diego’s team analyse the aromatic profiles of their coffees with a mass spectrometer. For the Red Plum process, for example, they found that the ⁩التخمير generated substantial amounts of aldehydes, such as hexanal، وهي عبارة عن مركب widely used in the food industry to create fruity flavours, and 2-heptenal, a key odorant in honeysuckle (Su et al 2020). 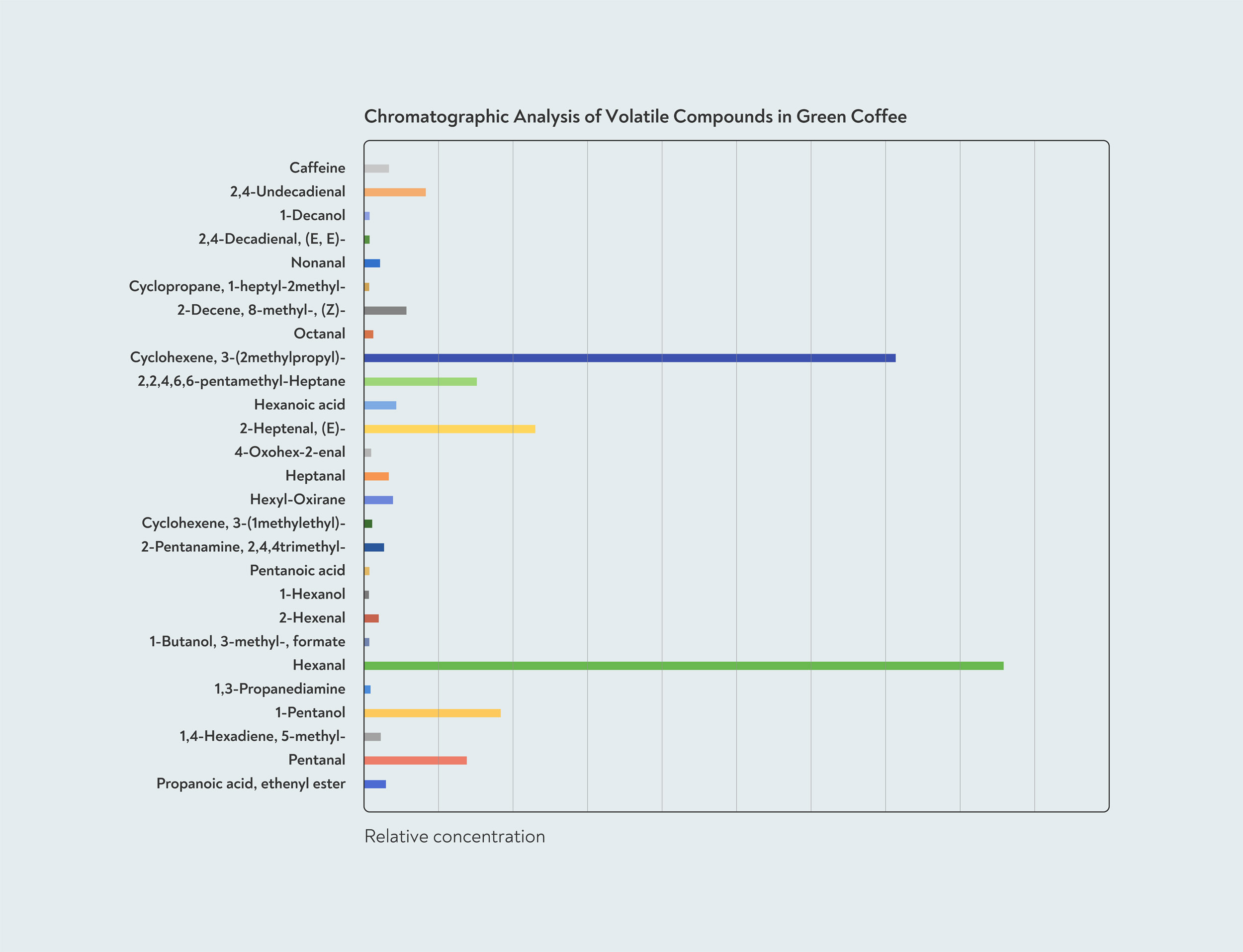 Some of the aldehydes responsible for the most distinctive fruity flavours in their coffees might be created during ⁩التخمير by yeast enzymes that break down coffee lipids, Diego suggests.

Whatever the metabolic pathway that generates the distinctive aromas of these coffees, it’s clear that Diego’s complex and tightly controlled ⁩التخمير process, together with his innovative mechanical dryer, can create some very distinctive and desirable cup profiles.