Does analysing an espresso puck after extraction tell you anything useful about what happened during extraction?

With espresso, we don’t have this luxury, so baristas are always on the lookout for visual indicators that a shot was less than perfect. The problem is that uneven flow and channelling are not always visible, so looking at the flow isn’t a reliable indicator that a shot ran perfectly. To get around this difficulty, some baristas advocate inspecting the puck after extraction, looking for signs such as holes in the puck, or a sloppy texture on top of the puck.

At Barista Hustle, we don’t think that these are reliable indicators of a problem with the shot — but we’re also not aware of any conclusive evidence one way or the other. So we asked BH Coach Nikolai Fürst to run some experiments for us, making espresso with deliberately bad tamping or distribution to see if this had any effects on the appearance of the puck.

These experiments showed that bad distribution and tamping doesn’t result in holes in the puck, or a wet coffee bed. We did, however, find one clear sign of uneven flow in an espresso.

To see what effect bad distribution would have on the appearance of the puck, Fürst made some espressos with deliberately bad distribution, by pushing the coffee grounds to one side of the basket before tamping, and some espressos with deliberately bad tamping. He also made a series of shots at different grind sizes, and control shots, following their normal technique. He made at least 3 shots under each set of conditions, and repeated the experiments with a different coffee, with the same results in each case. The first thing to note is that we found no evidence that bad distribution or tamping resulted in more visible holes appearing in the puck. This supports the conclusion that these holes are not signs of channelling during the extraction, but rather are caused by the drop in pressure that happens at the moment that the shot is stopped. Picture: Very uneven tamping didn’t result in more holes appearing in the puck. This suggests that the holes aren’t a direct result of channelling during the shot.

In a typical semi-automatic machine like the Black Eagle, the flow of water through the group is controlled by a three-way solenoid valve. During the shot, pressurised water passes through the valve onto the bed of coffee. When the shot is stopped, the solenoid closes, stopping water from flowing in from the pump and releasing the pressure via a separate pipe called the exhaust. When this happens, the pressure gradient, and thus the flow through the puck, suddenly reverses, with the high pressure inside the coffee puck pushing water back upwards through the puck. This reversal in flow can break open the puck, resulting in the dramatic holes sometimes seen in a spent coffee bed. When the valve closes (b), the residual pressure within the puck pushes water in the opposite direction, out of the group and into the exhaust. When this happens, the flow of water through the puck is abruptly reversed.

The only condition in which we did find more holes appearing is when the coffee was coarsely ground (less than 20s shot time), which could indicate a form of channelling, but could just be due to the puck having less cohesion overall. Picture: A coarse grind or fast shot time resulted in visible holes in the puck.

We also found no evidence that poor technique resulted in a wetter (or drier) puck. A sloppy puck, with visible water or sludge at the top, is sometimes considered to indicate incorrect grind size or poor puck prep. However, as BH founder Matt Perger explains in this blog post, the difference between a sloppy puck and a dry one comes down to the size of the headspace above the puck. Good or bad puck preparation seems to make no difference in this case.

We didn’t find any sign that bad tamping or distribution causes visible holes or changes in the texture of the puck, while the coffee is still inside the portafilter. However, when we turned the pucks out onto a board, we did notice an interesting pattern: Wherever the coffee bed was thickest or densest, dark spots or patches would become visible on the bottom of the puck. 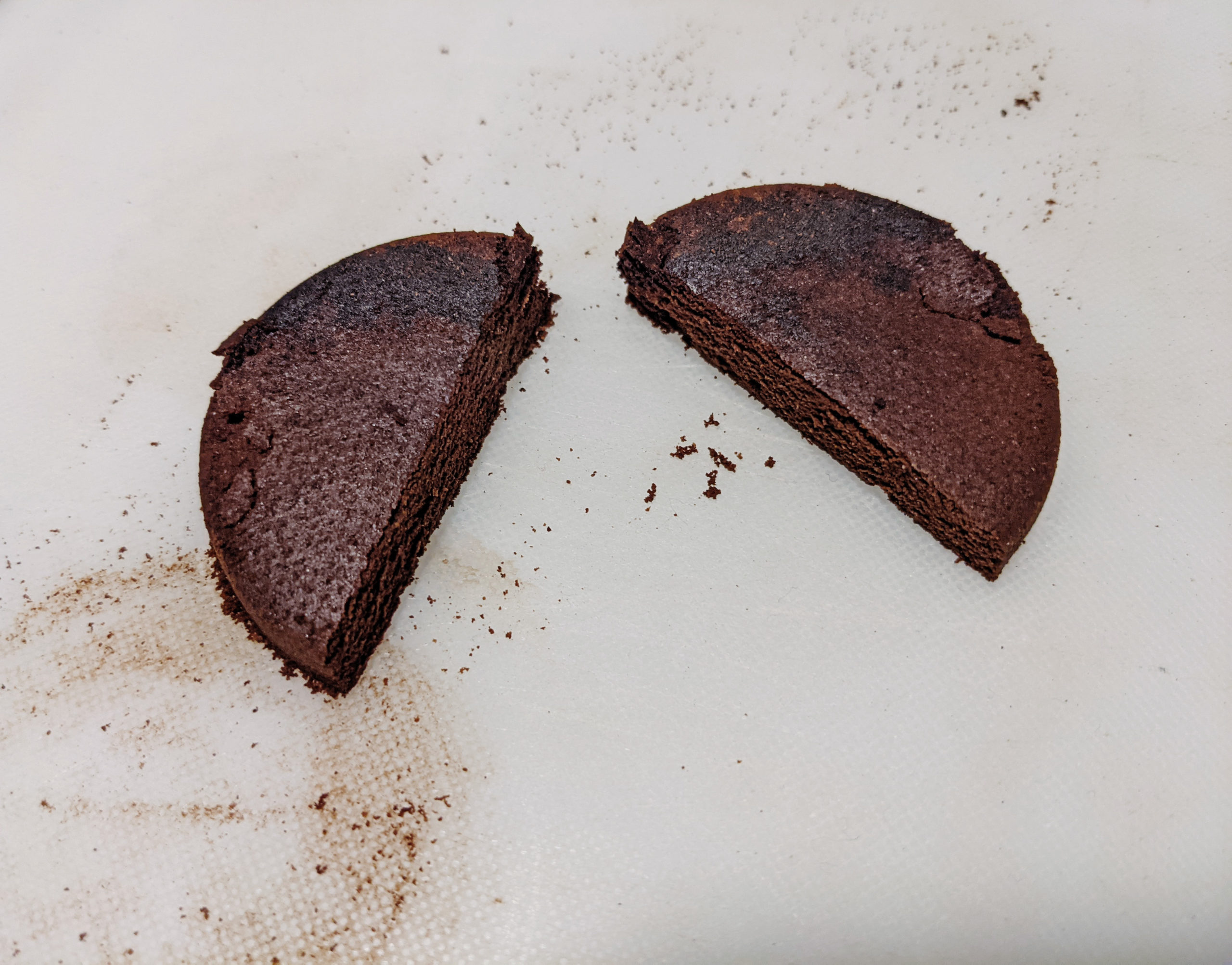 Picture: Dark patches are visible on the bottom of the puck where the coffee bed is thickest.

We also saw similar dark patches appearing on the bottom of any puck made with a very fine grind or low brew ratio, and concluded that the patches are probably unextracted coffee solids deposited at the bottom of the bed, that appear anywhere that the flow is blocked. With fine grind sizes, the dark patches also corresponded with oily residue on the filter basket itself, suggesting that the dark patches contain coffee oils or colloids, left behind when the flow of water is too slow to carry them out of the puck.

This type of pattern has also been reported by Robert McKeon Aloe, who found that the dark patches corresponded to areas where the shower screen or filter basket limited flow through the puck. The dark patch in the puck below corresponds to the oily residue on the portafilter basket above.

Our experiments confirm that visible holes in the top of the puck are not a good guide to what happened during the extraction. Dark patches at the bottom of the puck, however, do seem to reliably indicate blocked flow in the puck.

McKeon Aloe found that using paper filters at the bottom of the puck made any dark patches easier to visualise, but even with this technique it may be that these patches are only detectable when using very fine grinds or short brew ratios (McKeon Aloe typically uses a very high ratio of coffee to water, close to 1:1, with shot times of 40s or longer).

It’s clear though, that if you do see dark patches on the bottom of your puck, then it’s a sign that the flow has been uneven, and some of the flavour is missing from your espresso.