A few weeks ago, we released the first in a series of experiments on blooming in filter coffee. Our aim is to find some measurable evidence to support one blooming method over another. Rather than rely on flavour, which is very hard to measure objectively, we tried to track the effectiveness of blooming by looking at how much water was absorbed during the brew, and if there was any effect on the resulting extraction.

We found, to our surprise, that stirring reduced the amount of liquid absorbed during the bloom, although this didn’t have any measurable effect on the resulting extraction. This result implied stirring could be less effective than other blooming methods, because it results in less water being absorbed.

While the results were interesting, it’s hard to draw firm conclusions with a limited dataset — so we asked our readers to help us collect more data. We also suspected that the effect of stirring might be quite different in larger brews. To test this out, we again enlisted the expert help of BH Coach Matthew Brown to set up a second experiment. This time, we tested a larger batch size, and used a more complex protocol to really see what’s happening during the bloom. The ‘Bird’s Nest’ method of blooming, shown with a dose of 15 g (left) and 30 g (right). The Bird’s Nest method has no measurable effect on extraction or on the amount of water absorbed in the bloom.

Once again, the results threw us a curveball. With the larger batch size, we saw the opposite effect to our previous experiment: stirring results in more water being absorbed during the bloom. We also found that the water that did escape the bloom was much higher in TDS, suggesting that water was able to contact much more of the coffee grounds after stirring.

The Putative Rules of Blooming

After we posted the first experiment, we discussed the results with Professor Steven Abbott who, as always, had some judicious practical guidance for us. First of all, he explained, we needed more data: Not just more data points, but also more sophisticated measurements of what is happening during the bloom.

We also needed to lay out what we’re trying to achieve: What does the ideal blooming method look like? Professor Abbott suggested five ground rules to explore:

Today’s experiment aims to investigate rules one, two, and four. If a different batch size and method delivers different results, that confirms the idea behind rule four — that there is no one perfect method of blooming, but that different brews benefit from different blooms.

Rules one and two, meanwhile, suggest that we should be measuring not only the amount of water that escapes during the bloom, but also whether that water has been in contact with coffee. We can do that by measuring the TDS of the liquid as it leaves the bloom: A higher TDS would suggest that there was more effective contact between the water and coffee during the bloom.

This time around, the plan was to test 30-g doses of coffee in a glass V60 02 filter cone, using a Modbar Pour-Over module to automatically dispense 110g of water for the bloom. The modbar was tested and found to be consistent to within ±2g. The experiment underway at Coffeebar in Redwood City, California. The sample cups catch the liquid escaping the bloom and are switched out every six seconds.

To find out how the liquid escaping from the bloom varies over time, we took samples of the liquid by placing a different cup underneath the cone at 6-second intervals. We let the coffee bloom for 60 seconds in total, resulting in ten samples per brew. For each sample we measured the weight and the TDS, using a refractometer.

We tested four methods for the bloom: A control with no spins or stirs; creating a bird’s nest in the ground coffee; stirring with a North-South-East-West (NSEW) method; or the ‘Rao Spin’, using 3 swirls of the brewer. We repeated each method three times.

The difference was slight however, and only statistically significant (T-Test, p<0.05) for stirring compared to the Rao Spin; neither stirring or spinning were significantly different to the control and Bird’s Nest methods.

What was striking, though, is that the results for the control (not stirring) and Bird’s Nest methods were much more variable. This indicates that agitation in the form of stirring or swirling makes the behavior of the bloom more consistent for two-cup batch sizes. This pattern was fairly consistent across all three repetitions of the experiment. With the control method, however, there was much less consistency about when the water escaped from the bloom, as well as how much escaped overall. 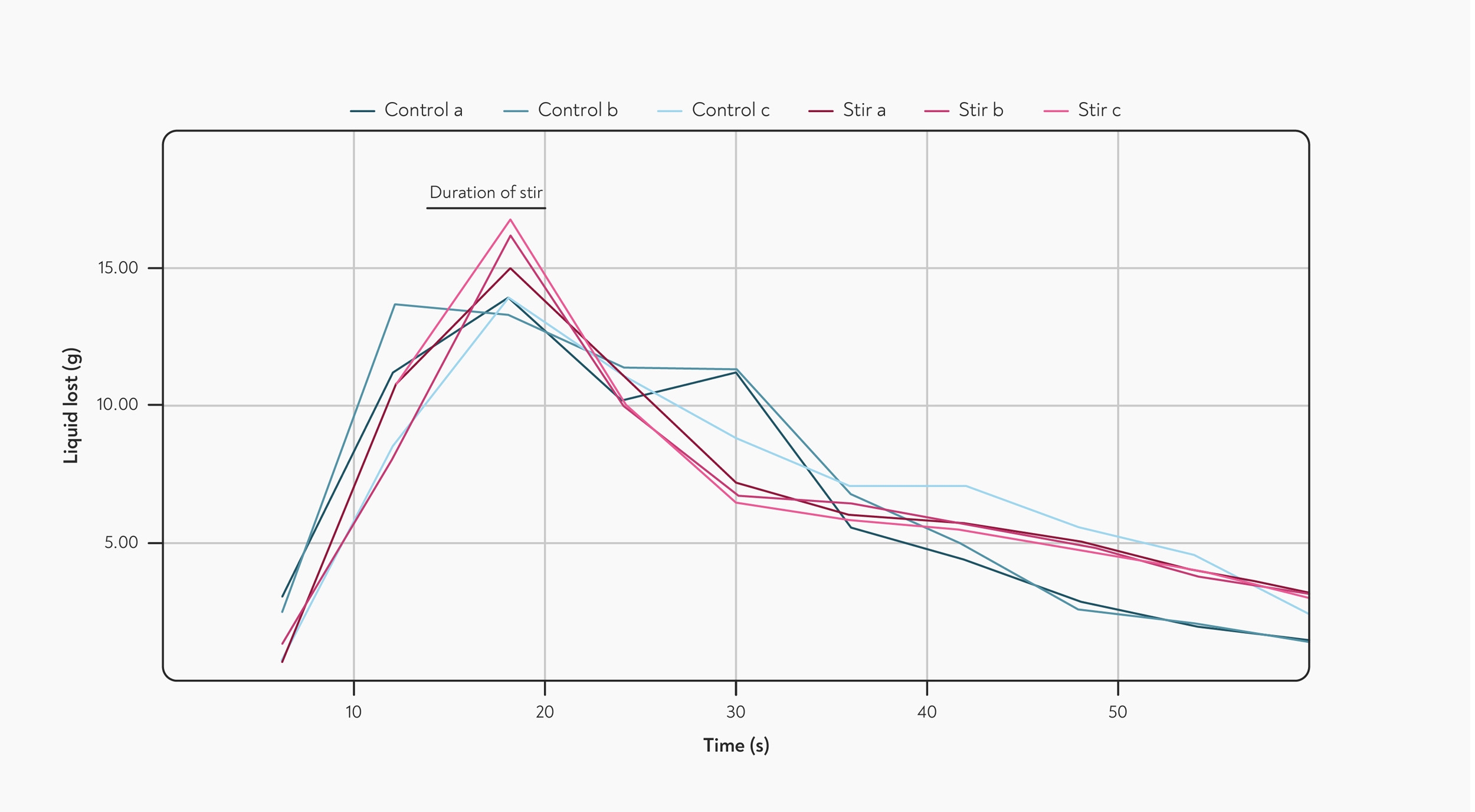 Liquid lost from the bloom over time. The amount and the timing of the flow of liquid out of the bloom is more consistent when stirring, compared to the control.

While the differences in water lost from the bloom are slight, the real advantage of stirring is shown by the TDS of the liquid that escapes the bloom. Stirring the bloom resulted in significantly more solids being extracted (2.3 g, representing 7% extraction from the bloom alone) than all other methods, indicating much more effective contact between the water and the coffee.

Stirring gives a big bump to the TDS of the liquid escaping the bloom, and the TDS remains elevated right to the end of the bloom. Interestingly, the TDS only seems to increase after the stirring is finished. This suggests that stirring improves the overall contact between coffee and water, but while the stirring is taking place, the extra liquid escaping has not had such good contact with the coffee. Total dissolved solids in the liquid escaping from the bloom. Stirring results in a big increase in TDS, which persists until the end of the bloom phase.

The Bird’s Nest and the Rao Spin, meanwhile, had virtually no effect on the TDS of the liquid escaping the brew, and didn’t increase the amount of water absorbed by the bloom either — suggesting that neither method does much to improve contact between the water and the coffee.

Is Stirring Best After All?

These results paint a convincing picture of stirring being the most effective blooming method. Stirring slightly increases the amount of water absorbed in the bloom, and has a dramatic effect on the TDS of the liquid that did escape. Both these results suggest that there is more contact between water and coffee when you stir your bloom with a spoon or spatula — and this most likely represents more even saturation of the coffee at this stage.

The results also hint at a possible way to optimise stirring: more water escapes the bloom while the stirring is taking place, while the increase in TDS only happens after the stirring has finished. This suggests that while stirring improves the overall contact between water and coffee, it also leads to a certain amount of bypass. Perhaps the best stirring method could take this into account, by stirring for only a short amount of time to reduce the amount of bypass.

On the other hand, these results are almost the complete opposite of what we found in our previous experiments, which used a smaller batch size by half, but also a different methodology. With a 15-g dose, stirring seems to be less effective than other blooming methods. Apparently the effectiveness of any given bloom method varies depending on the batch size or method used.

To confirm whether it’s the batch size that caused this effect, or the different methodology, next time, we’ll be rounding up this series of experiments by using the same method but a smaller batch size.

For now, however, we can say with some certainty that this experiment demonstrates the importance of Professor Abbott’s Rule Four: ‘Because there’s no universally agreed-upon best method, different methods, batch sizes, and/or different grinds of the same coffee must require different blooms.’