For pour-over methods like V60, Barista Hustle has long advocated using very hot water for brewing coffee — just off the boil, or at around 98°C for anyone using a temperature-controlled kettle.

However, in our new course all about Immersion brewing, we make quite different recommendations for different brewing methods. Some methods, like syphon or cezve, require high brewing temperatures as an integral part of the brewing method. However, for ‘static immersion’ methods such as the French Press, we have come to recommend lower temperatures than for pour-over coffee — perhaps just 94°C, depending on the size of the brew.

This might be surprising, considering that French Press has a very long brewing time, and hence a high potential for heat loss from the brew. Like any brewing suggestion, we recommend being guided by your taste buds first and foremost — but there are some good reasons to consider trying lower brewing temperatures in your French Press.

Why does Temperature Matter?

One commonly-repeated piece of traditional advice for brewing coffee is never to use boiling water. At some point in your coffee career, you may have been told that boiling water will somehow ‘burn’ the coffee, or extract undesirable, burned-tasting flavours. In line with this, the SCA recommends that coffee be brewed between 90 and 96°C, and stipulate that the middle of that range (92–94°C) should be used for cupping.

It’s certainly true that excessively high temperatures can extract undesirable flavours from coffee: higher temperature water allows the extraction of the less-polar components of coffee such as pyridines, which are associated with bitter, astringent, roasty, and burnt notes (Sánchez López et al 2016). However, many coffee professionals now advocate for using higher temperatures for brewing pour-overs. This may be perhaps in part because coffee is being roasted lighter, and coffee quality and roasting standards have improved, but also as a result of finding ways to achieve higher, more even extractions, thereby avoiding the ‘burned’ flavours associated with over-extraction. 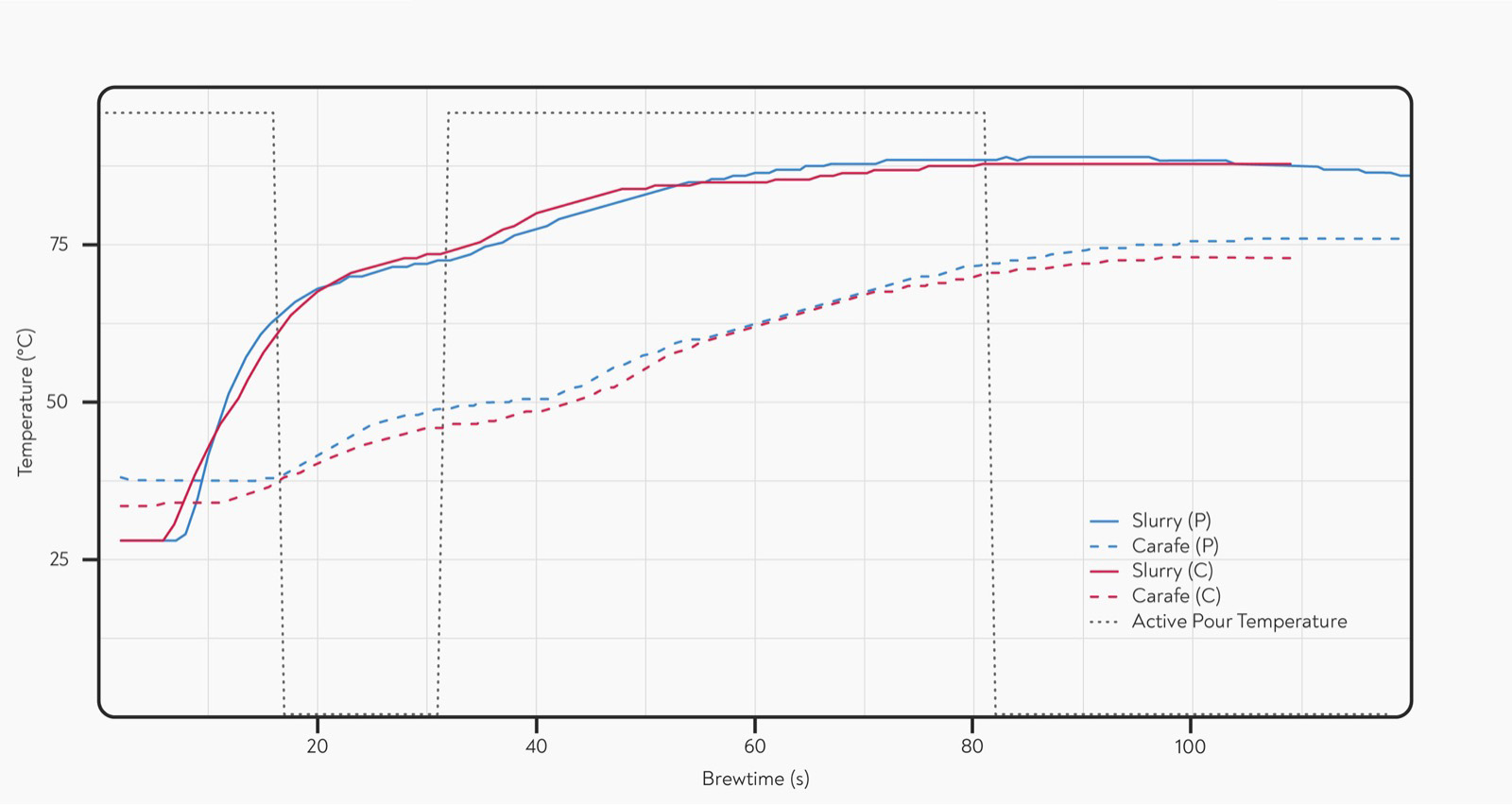 Slurry temperature during a pour-over brew. The brewing water (dashed line) was poured in at 96°C in two portions: a bloom, and then a single long pour. The solid lines indicate the slurry temperature, the dashed lines the resulting temperature in the brewed coffee. Whether the brewer is made from plastic or ceramic, the effective brewing temperature never reaches 90°C. Graph courtesy of Colin Runnion.

Compare the results above, to the following measurements  taken by World Barista Champion Gwilym Davies, during an experiment from our new Immersion brewing course. In a one-litre brew, using brewing water at 97°C (very similar to that used in the pour-over above) the slurry temperature remained above 90°C until nearly 5 minutes had passed. After breaking the crust, the temperature dropped sharply and continued to decline more quickly, but during the first 5 minutes, when most of the extraction is taking place, the effective brewing temperature is much higher than a pour-over brewed at a similar temperature. 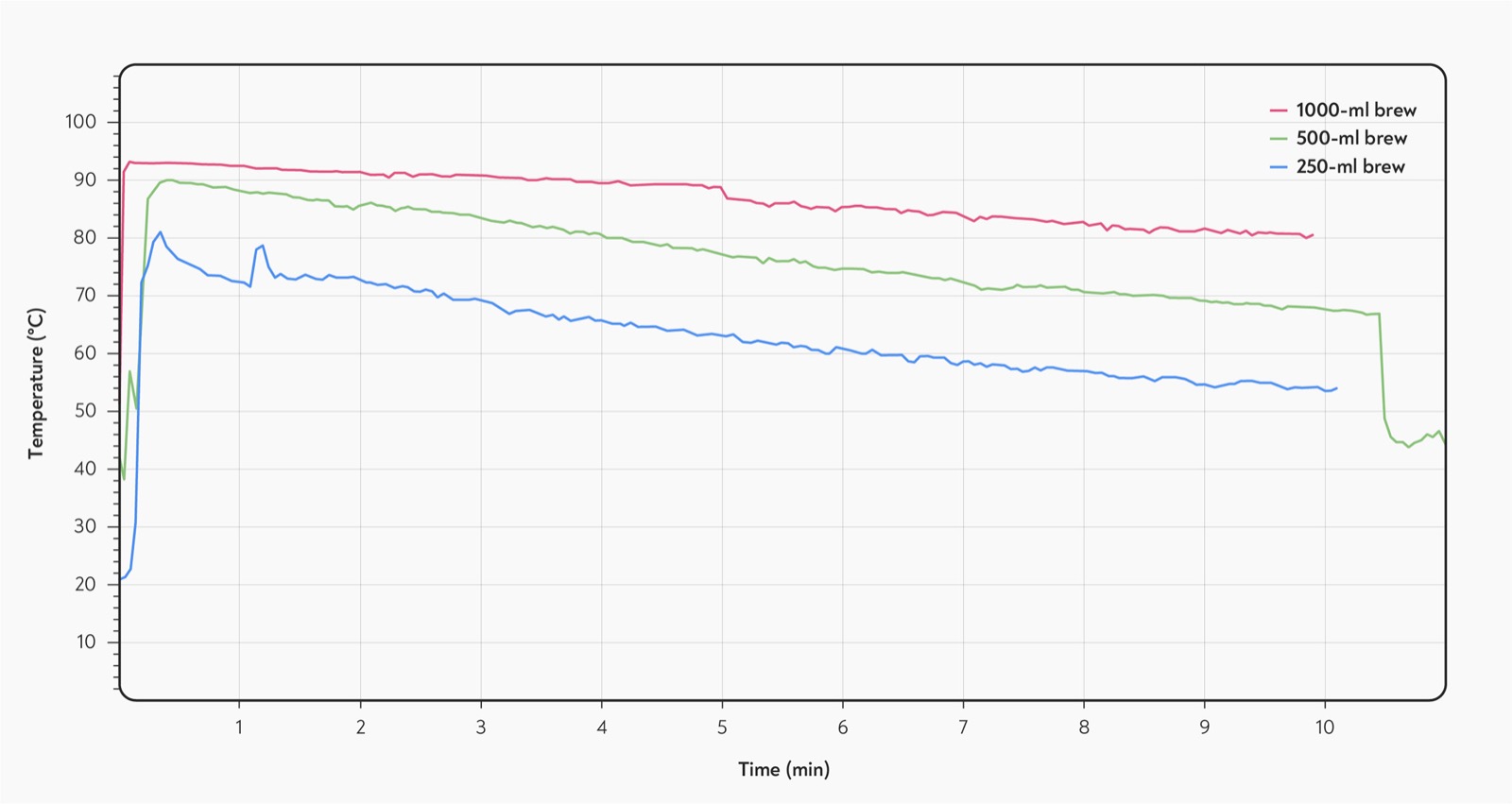 Heat loss from an immersion brew. A 1-L brew (red) and a 500-ml brew (green) and a 250-ml brew (blue) were made in an enamel jug, and the temperature logged over time. All three brews were stirred at 5 minutes to break the crust. The smaller brew loses heat much more quickly than the larger ones and the slurry temperature of the smallest brew only rose above 80°C for a few seconds.

This finding suggests that to achieve a flavour profile similar to a typical pour-over brew, it would make sense to brew a one litre French Press using water several degrees cooler.

How Does an Immersion Brew Stay Hot?

The first is how much the brew size affects heat loss. In his experiment, the smaller 500-ml brew lost heat much more quickly. Most heat is lost by evaporation from the surface, and a smaller brew made in the same jug has the same amount of surface to lose heat from but only half the amount of water, so loses heat roughly twice as fast. The second is that the crust insulates the brew, trapping heat inside. After 5 minutes, when the brews are stirred, the temperature immediately drops, and the rate of heat loss after the stir is higher than it was before. Both of these factors work against a pour-over brew: since the water is being added gradually, and water is constantly trickling out of the brew, the size of the slurry is always smaller than the equivalent immersion brew. Meanwhile the crust that insulates an immersion brew never gets a chance to form in a pour-over; the agitation from the brewing water breaks it up.

What is the Ideal Temperature?

As we’ve learned, the rate of heat loss for immersion brews will depend on the size of the brew (and the shape of the container that it’s brewed in). The Immersion course includes another experiment that shows that the choice of material for a French Press also has a big effect on the temperature and extraction of a brew. That means it’s impossible to suggest one ‘ideal’ temperature that will work for all brewers. Instead, the best guide is your palate.

The experiments outlined above help explain why it’s worth trying a lower temperature than you might have expected for a slow brewing process — especially if you’ve chosen immersion brew method, like the French press, or Jug coffee because it’s the easiest way to brew coffee for lots of people at the same time. The larger the pot, the cooler you should brew it to get the same results.

BH Unlimited subscribers can check out this new French Press Recipe featuring BH Coach, Julia Parera Deniz in the course. As a special feature, we’ve added this one to our YouTube Channel too.