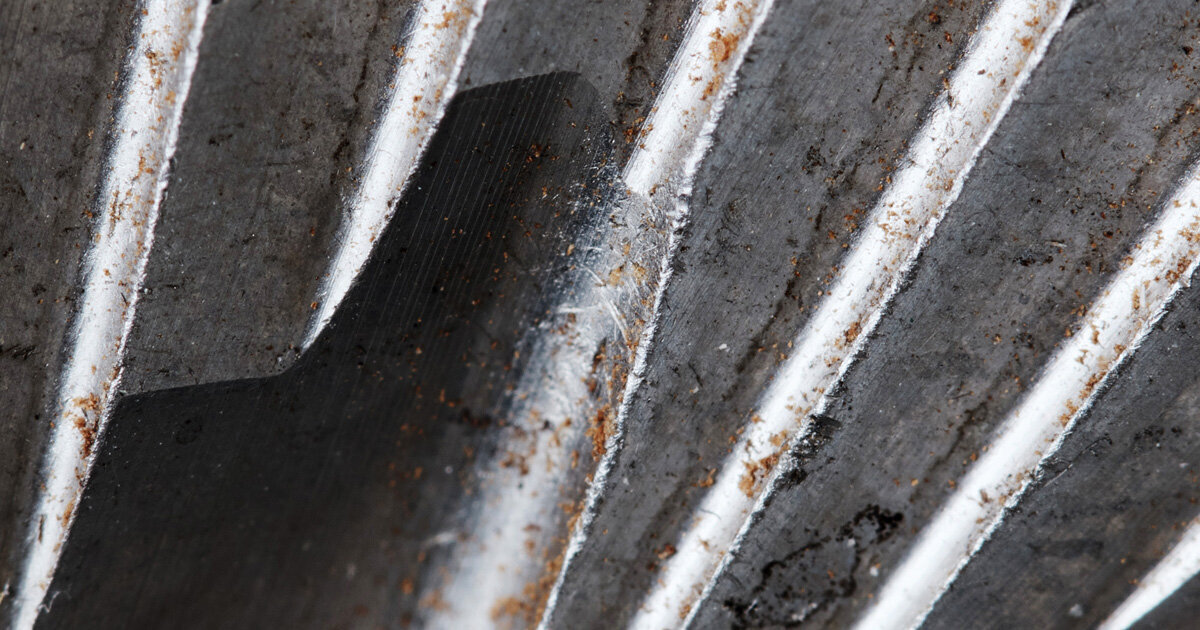 We’ve always said A. is the answer, but, in truth, that’s based on practical experience, not scientific proof. So this week we decided it was time to find out what’s really going on.

Back to the quiz question... Everyone says that blunt burrs produce more fines and there is plenty of evidence to back that up. So it follows that, after you’ve used the same burrs for a few hundred kilos of coffee, you’ll begin to taste more over extracted flavours on the standard cupping grind setting. So then the obvious thing to do is to gradually coarsen the cupping grind setting during the lifespan of your burrs to mitigate the advancement of fines because you get fewer fines the coarser you grind. We decided all this sounds a bit too speculative, so we asked Jessica Sartiani and Tom Hopkinson to put together an experiment for us to find what’s really going on.

Mahlkoenig-Italy were nice enough to loan Jessica some older EK43 burrs that had ground ~300kg of coffee, as well as some brand new ones to allow her to run a side-by-side test. She took grind samples on exactly the same grind setting from three different coffees with both burr sets. Next, the lovely Italian Barista Champion Francesco Sanapo was kind enough to run all Jessica’s grind samples through his laser diffraction particle size analyser (LDPSA).

If you’d like to access a lesson and some videos on how LDPSA works, we’ve made this lesson from our online course Advanced Coffee Making free for this month only. And if you want to find out how Jessica and Tom’s experiment panned out, here’s their paper .

This week in the Buyer’s Guide to Brazil we turn our attention to the state of Bahia. Coffee has been important to Bahia’s economy since at least the Nineteenth Century, but it did not become a major producer on a national scale until the 1970s. The regions that have emerged are highly specialised in coffee growing and mainly focused on producing coffee for the specialty coffee industry.

The best-known growing region in the state is the Chapada Diamantina, a rocky plateau which lies at the heart of the area called Planalto Baiano (Bahia plateau). This spectacular rocky landscape, criss-crossed by vast canyons, is home to some of the best coffee in Brazil: in 2016, farms from this area took home an astonishing nineteen of the twenty-four top spots at the Cup of Excellence.

Meanwhile, in the west of Bahia lies one of Brazil’s most efficient coffee-growing regions. The arid grasslands in this region were considered unsuitable for coffee growing until the development of large-scale irrigation in the 1970s. Since then, the region has become recognised for quality with an Indicação de Procedência (IP), but also produces some of the highest yields per hectare than anywhere in the country.

You’d be amazed how long it took for coffee makers to have electric pumps built in them. This, as we are reliably informed by historian Professor Jonathan Morris , is due to the fact that

‘gas drove the Italian market — electricity was very limited in penetration in Italy until the post-war era. However, it is also true that Milan was at the forefront of electrification and so the early availability in parts of the city may have sparked some of the early models with an electric option.’

The earliest evidence of an electric pump in a coffee maker that we have found appears in a patent from 1950 by Beniamino Rota. Check out Rota’s patent and a whole lot more info on the evolution of espresso machine in the next instalment of our latest online course, The Espresso Machine .

Not So Quick Links

The nice folks from CCILU (pronounced CHEE-loo) sent a couple of pairs of their Xpresole prototype all-weather coffee boots to the office a couple of weeks ago. If you’re a lover of the LL Bean style of duck boot (Wellingtons with laces for the benefit of our English cousins) or you like a bit of that rubber Birkenstock thing — the chosen footwear of chefs and cheese mongers alike —, then these are a very slick and sustainable alternative. Apparently every part of the boot is made from some kind of coffee waste product. They have a kickstarter running for just a couple more days.

We’re making an animation of how the E61 works for the next updates, but if you want to jump the gun, read this ode to the E61 from Kees Van Der Westen . His quote will surprise you:

He’s not saying multi-boilers aren’t effective; it’s just that they use so many components and far more electricity to achieve a tiny bit more thermal stability than the classic E61 which is totally analogue and virtually indestructible.

On this same topic, the lovely Whole Latte Love peeps have really gone for it with this video . They got the Dremel out and cut away sections across virtually every component of a retired E61 machine to show you its precise inner workings.