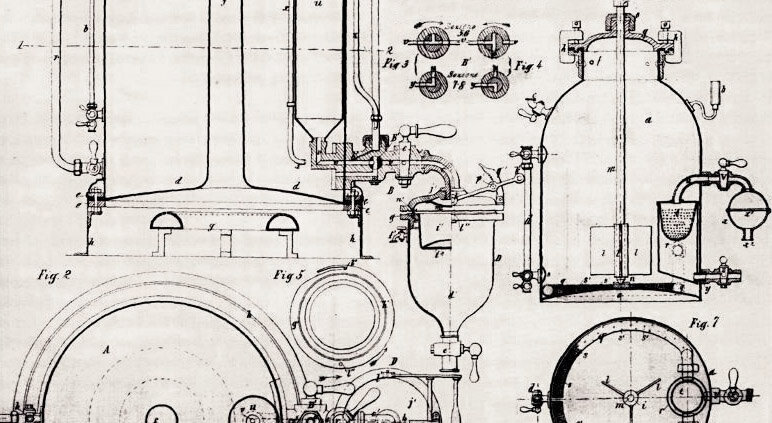 Our brand new course called The Espresso Machine is well underway. After an exploration of the many ingenious, bizarre and sometimes downright dangerous 19th century coffee makers that were the precursors to modern espresso, we arrived at Angelo Moriondo’s machine from 1884. This machine and its disappearance from the history books until the early nineties is an intriguing mystery. Moriondo himself was not just an inventor, he was also the proprietor of a chocolate shop in Turin called Moriondo & Gariglio. As far as we know he only produced machines for his own establishments, which also included a hotel and a cocktail bar — believing his machine’s unique style of brewing and their imposing stature would drive customers to him. We assume he took the time to patent the technology as a means of ensuring no other Turin ventors would be able to compete with him on coffee quality.

One thing we do know is how difficult and expensive it is to produce a machine like this in small numbers. In 2018, Officina Maltoni went to the trouble of creating a reproduction of Moriondo's machine which is now on display at the Museum of Coffee-Making Machines ( MUMAC ) in Milan. The complexity of the operation to produce moulds, cast all the components in brass, grind and polish and finally nickel plate every separate part was immense. This video shows you the entire rebuild. It gives you an idea of the scope of Moriondo’s ambition and his desire to ensure his businesses stood out from the crowd.

Food historians had lost touch with Moriondo and his patent, but fortunately through the work of collectors Ian Bersten and Sebastien DelPrat, his patent was unearthed from the Italian patent archives and the world’s ‘nearly’ first espresso machine was reinstated in the annals of coffee history as the key turning point in the birth of espresso. It was Bersten who found the patent and Delprat who found another crucial piece of evidence: a tiny corner of an old sepia photograph taken at the 1898, Torino exhibition. Delprat is convinced (and so, more or less, are we) that you can see Moriondo’s machine in the corner of this photo, taken over 120 years ago. This intriguing post by Bersten with an excerpt from DelPrat tells the story and shows you the photo in question. It’s got the flavour of an Alfred Hitchcock mystery.

Note: We say ‘nearly’ an espresso machine because Moriondo’s machine was, in fact, a batch brewer. This week, our Italian translation partner, Jessica Sartiani interviewed Enrico Maltoni, the founder of MUMAC, to find out more about how Moriondo’s machine worked. Maltoni explained that the machine could accommodate 500-600 grams of coffee in the basket. But, as Maltoni told us,

For me, the first is the Moriondo machine, even if it is not a real espresso made with a portafilter. Moriondo was the first to create a large steam pressure machine designed for the bar — you can almost call it an espresso machine.

In the next updates, BH Unlimited subscribers will find out all about the machines that you can definitely call espresso machines.

The Espresso Machine course structure has been designed to take you part-by-part through the anatomy of the modern espresso machine. But, as you can see from the digression into Moriondo’s world in the Prologue, we plan to devote a lot more time introducing the inventors and innovations that gave us each new refinement in machine design. Now that we’ve reached Chapter One, we have gone deep inside the bowels of the beast.

This week we look into the pros and cons of copper, brass, and steel boilers and we take some time to understand the ways in which companies like La Marzocco have started to use lost wax casting to fabricate their stainless steel boilers. Just to give you the basic idea, this video from the V&A museum in London shows you how the process works with fine art. And this video shows you how it’s done in a giant stainless steel foundry.

Lost wax casting was once the exclusive domain of aerospace technology or fine-jewellery making. But this big step-up in technology, whilst being very expensive, has become accessible to coffee machine manufacturers because it introduces a lot of savings in other areas — one of them, for better or for worse, being labour costs: many boilers can be cast simultaneously in a modern lost wax casting foundry. But it adds untold benefits by removing welding from the equation. So often it is around the weld in a boiler where corrosion and leaks occur, and of course, if you cast the entire boiler then it becomes one big piece of steel — no welding needed.

We will have two new pieces coming to you from Jonathan Gagne over the next week. The first of them is now live on the site: It’s part three of his exploration of using ultra low fines burrs in espresso making. The other one will be published next Friday, so stay tuned: Gagne has focussed his gaze (which during the week is usually zoned in on exoplanets somewhere out in the Kuiper Belt — that’s no exaggeration; Jonathan is an award winning astrophysicist) on the Aeropress.

Brazillian journalist and podcaster Kelly Stein is producing some inspiring episodes on Coffea , Brazil’s first coffee-themed podcast, in both English and Portuguese. It’s a completely independent, listener-funded initiative that is essential listening.

Please take the time to view this gallery of machines in the Maltoni collection. But be warned, it may leave you thinking, ‘Why don’t they make machines that look as beautiful as that nowadays?’