We’ve been writing about extended fermentation practices recently. To try and get a better idea of the trend in long fermentation in Colombia and beyond, the obvious person to check in with first was Nikolai Fürst . Medellin-based Nikolai is just a phenomenally cool person so if there’s a trend in Colombian coffee, he’s gonna know all about it. Nikolai was able to give us the low down on several producer partners he works with who are really into long fermentation. (You might remember, in this recent blog post , we outlined a 740-hour process which Nikolai worked on with Omar Arango from Finca San Luis.) In this latest interview , we talk to Nikolai about another special coffee he’s been involved with this season which underwent 380 hours of fermentation. You know, in Colombia, more than 20 hours is considered ‘extended’, so half a month is really something else.

Drawing out fermentation is a little risky; it requires a lot of trial and error, good hygiene practices and, by the sounds of things, a bit of ‘luck’ too. Here’s a quote from the next interview we carried out, this time with processing consultant Lucia Solis:

‘…the bottom line is genetic luck. Omar's farm could be [located] in a specific niche microclimate with favourable microbes.’

Lucia helped us unpack the technical challenges of long fermentation and some of the drawbacks. This interview is fascinating — there are some elements in this Q and A which parallel the debate between natural and conventional winemakers.

A point which Nikolai made to us was that his interest in long fermentation stemmed from the need to find ways to enhance the castillo and colombia hybrids, which aren’t flattered by the conventional washed fermentations that taste so fantastic with the older bourbon and caturra varieties. This opinion echoes the thoughts of Felipe Sardi from La Palma y El Tucan, when we interviewed him about lactic processing when we were writing the Processing Course and Certification .

For the final interview in this series, we felt the perfect person to seek out was Jamison Savage from Finca Deborah . Jamison and Lesley Savage are very famous for their creative approach to processing, and because they are handling almost flawless quality: geishas grown at very high elevation on the sides of Volcan Baru in Panama. We think you’ll love hearing from a producer who is also running the clock out on select natural anaerobic lots, not because he’s looking for ways to make up for deficiencies in the flavour profile of his coffees, but just because he’s into it. That’s actually the main thing we perceive about the whole scene. Putting effort, creativity into processing, and investing — let's be honest — a lot more time into processing appears to be highly enjoyable. 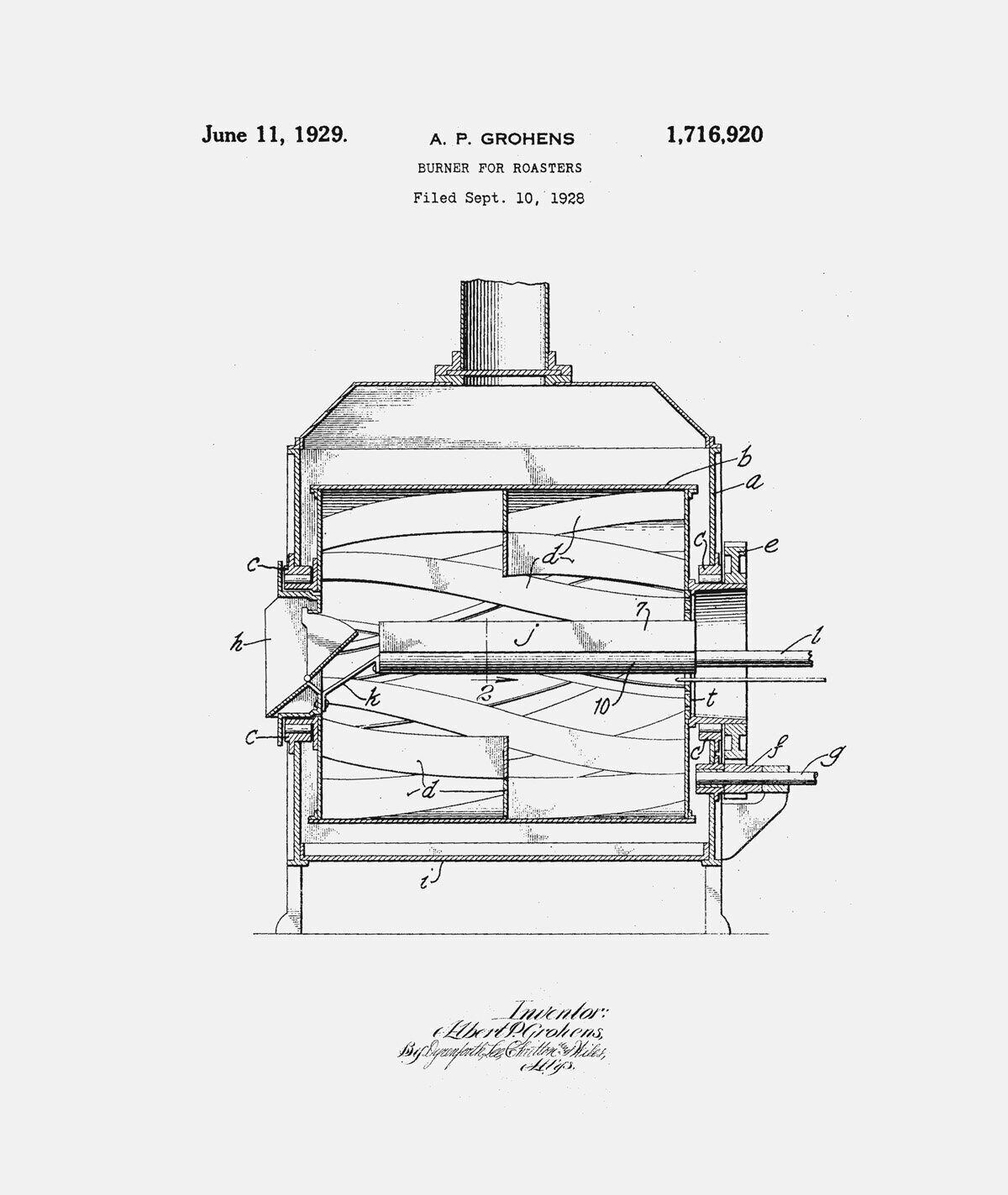 A Lambert Machine Company design for a roasting machine, featuring a gas burner (j) projecting into the middle of the drum. Source: Grohens 1928

The indirectly heated machine takes this concept to its logical conclusion, using hot air as the only source of heat. Without the risk of burning the beans on a hot drum surface, indirectly heated roasters can use hotter air temperatures, leading to faster roasts — ideal for large, industrial roasting machines such as Probat's Neptune series.

Very little meaningful scientific data exists that compares roasting machine designs. To understand the practical differences between directly and indirectly heated drums, we asked three well-known roasters to describe how the design of their drum roaster affects their roasting style. Krzysztof Barabosz, cofounder of Hard Beans in Opole, Scott Tedder, the head roaster at Bonanza in Berlin, and Belfast's Stephen Houston, formerly of Bailies Coffee Roasters and founder of Lucid Coffee Roasters , share their different roasting philosophies and explain why they prefer to work with drum roasters.

The Brazil/New York system of grading green coffee is considered an international point of reference, thanks largely to the importance of the ‘C’ futures market in setting terms for coffee contracts all over the world. While the Brazil and New York systems are closely linked, they are not identical, and this leads to both systems being frequently misrepresented. In this lesson we sift through the current legislation to bring you a definitive guide to the Brazil system of grading in use today. 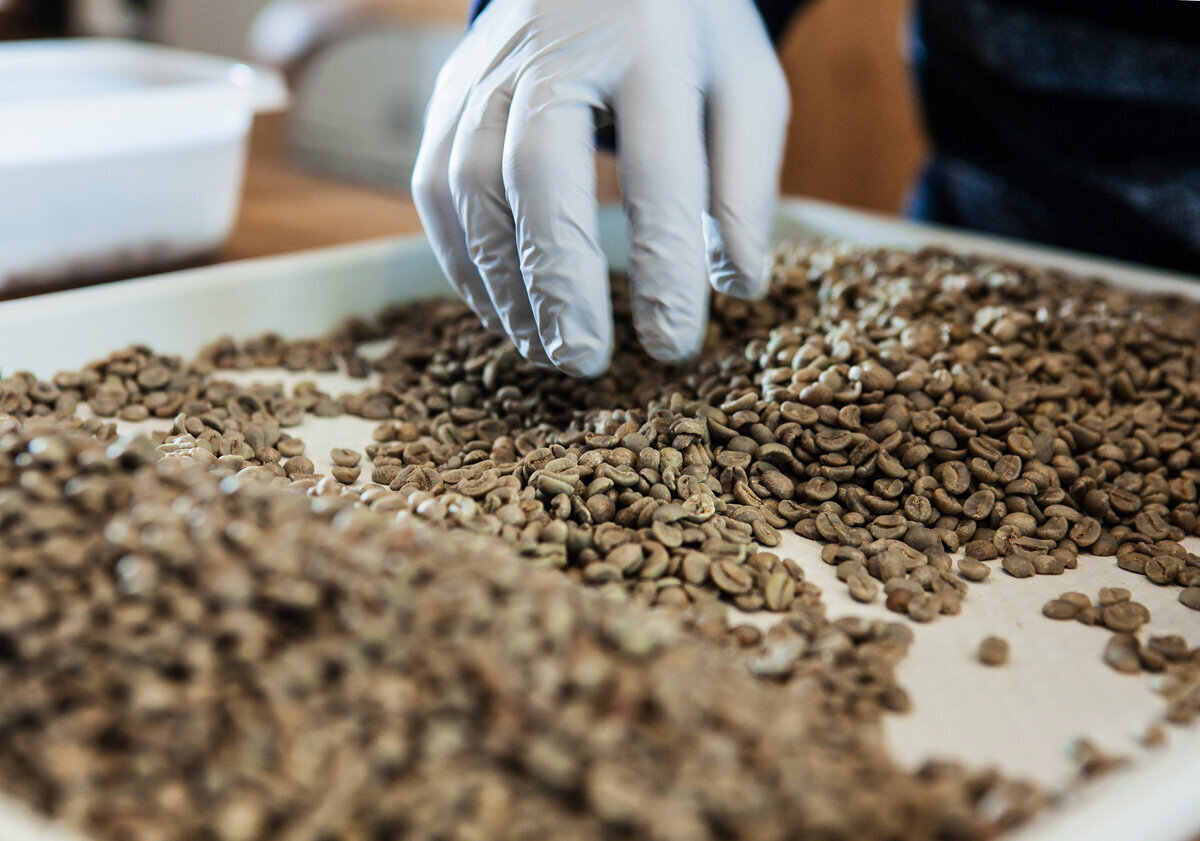 A sample of coffee beans being assessed for defects

Brazil was the first country in the world to establish a formal system for grading and classifying green beans, in 1836. From the very beginning, the Brazilian system categorised the coffee by the number of green bean defects. It is also one of the few coffee grading systems to include a grading for sensory quality as well. Despite its importance to the world coffee market, some descriptors, such as the categories for bean colour, remain vague or open to interpretation to this day, because the rules were developed over time by consensus between traders and warehouses.