The first value we need in order to analyse the data is the emissions resulting from production. ‘Production’ involves all the steps required to produce green coffee ready for export, including growing, processing, and milling. Over the next few lessons, we’ll compare a few different sources of data and identify the major contributions to emissions at this stage, beginning with growing the coffee. 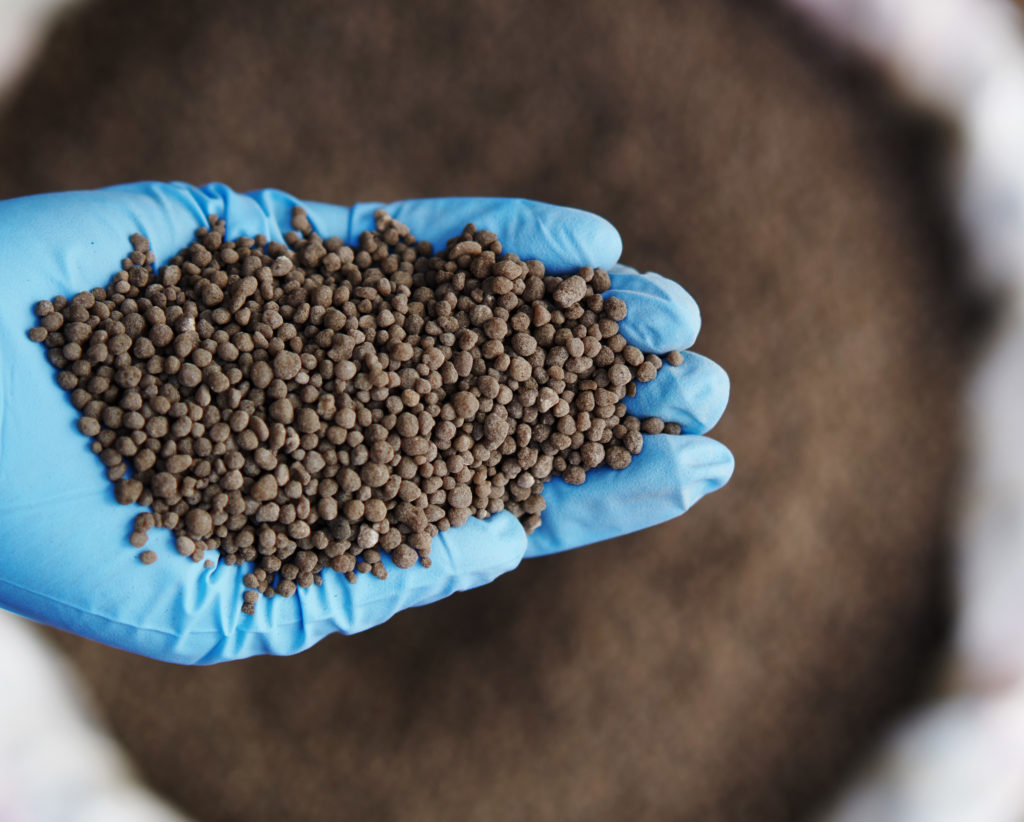 At the farm, the major input, from the point of view of the carbon footprint, is the fertiliser. According to Killian et al.’s study in Costa Rica, it accounts for around 94% of the carbon footprint of this stage of coffee production (B. Killian et al., 2013). By contrast, fossil fuel burning only accounts for only about 3% of emissions at the farm, mainly during transportation of cherry to the wet mill.

Some of the greenhouse gas (GHG) emissions from fertiliser use come from the manufacture of chemical fertilisers, but fertilisers are the main source of emissions even in organic farms. This is because nitrogen in fertilisers that is added to soil and not taken up by plants is converted to N2O, a powerful GHG, by bacteria in the soil.

Organic farms don’t use chemical fertilisers but might use manure or coffee pulp waste as fertiliser, which can release large amounts of N2O in the soil. Organically grown coffee may therefore reduce the emissions generated by fertilisers, but it will not completely eliminate them.

A significant amount of N2O is also released as a result of pruning. When coffee or shade trees are pruned, the pruning residues are typically left in place to decompose and return their nutrients to the soil. As they do so, they release a significant amount of N2O — enough to make up between 7% and 42% of the carbon footprint of a farm, according to Noponen et al. (2012).

The importance of N2O to the carbon footprint of coffee growing suggests that in both conventional and organic farms, efficient use of nitrogen would be an effective way for farmers to reduce emissions and save money. If farmers apply fertiliser only when plants need it, then more will be taken up by the plant, leaving less to break down in the soil and form N2O. Unfortunately, however, standard life-cycle analysis (LCA) techniques do not include a way to calculate nitrogen use efficiency, and little research has addressed how coffee farmers can most prudently use fertiliser.

Which fertiliser is used in an organic system is also important. Poultry manure creates much higher emissions than compost — and nearly as much as chemical fertiliser — because of the amount of N2O released (LD Vera-Acevedo et al., 2016). Where compost is used as an organic fertiliser, a large part of the emissions come from the production of the compost rather than from its application. In this case, improved compost systems such as biodigesters could reduce total emissions from production by up to 38%, according to a study of organic farms in Nicaragua (E Rahn et al., 2012).

Yield and Fertiliser Use

These studies suggest that switching to organic systems or to less-intensive farming could reduce emissions from coffee growing. However, Noponen et al. (2012) caution that because organic systems are less productive, switching to organic farming may result in more land being needed for coffee farming. If the land being turned over to coffee production was previously forest or grassland, the change of land use would result in additional emissions, which are not included in these calculations.

It’s also important to note that less-intensive farming does not always mean less-efficient uses of resources. A study of 116 coffee farms in Mexico, Guatemala, Nicaragua, El Salvador, and Colombia found that the fertiliser-related emissions from low-yielding farms were highly variable, which suggests that more-efficient use of fertiliser in these farms could increase yield and reduce the carbon footprint per kilogram of coffee (H van Rikxoort et al., 2014). ‘Our data suggest that fertilizers were often wasted on the farms of our sample because they were applied to systems whose productivity was limited by other factors, such as light, water, or the age and state of the coffee plants’, the authors write.