Received wisdom in coffee says that if you put a nickel, or a penny, on top of your القُرص after tamping, and lock the portafilter into the group and remove it again without brewing, you should just be able to see a slight impression in the القُرص from where the coin was pressed into the coffee. If you’re going to try this yourself, we strongly recommend you sanitise your nickel — or find a clean stainless steel disk of a known thickness and use that instead of loose change to keep things hygienic. The amount of room between the top of the القُرص and the shower screen is called the ‘مساحة الرأس’ or القُرص clearance — and according to this test, it should be fixed at about 2mm, and if not, you should adjust your dose accordingly. 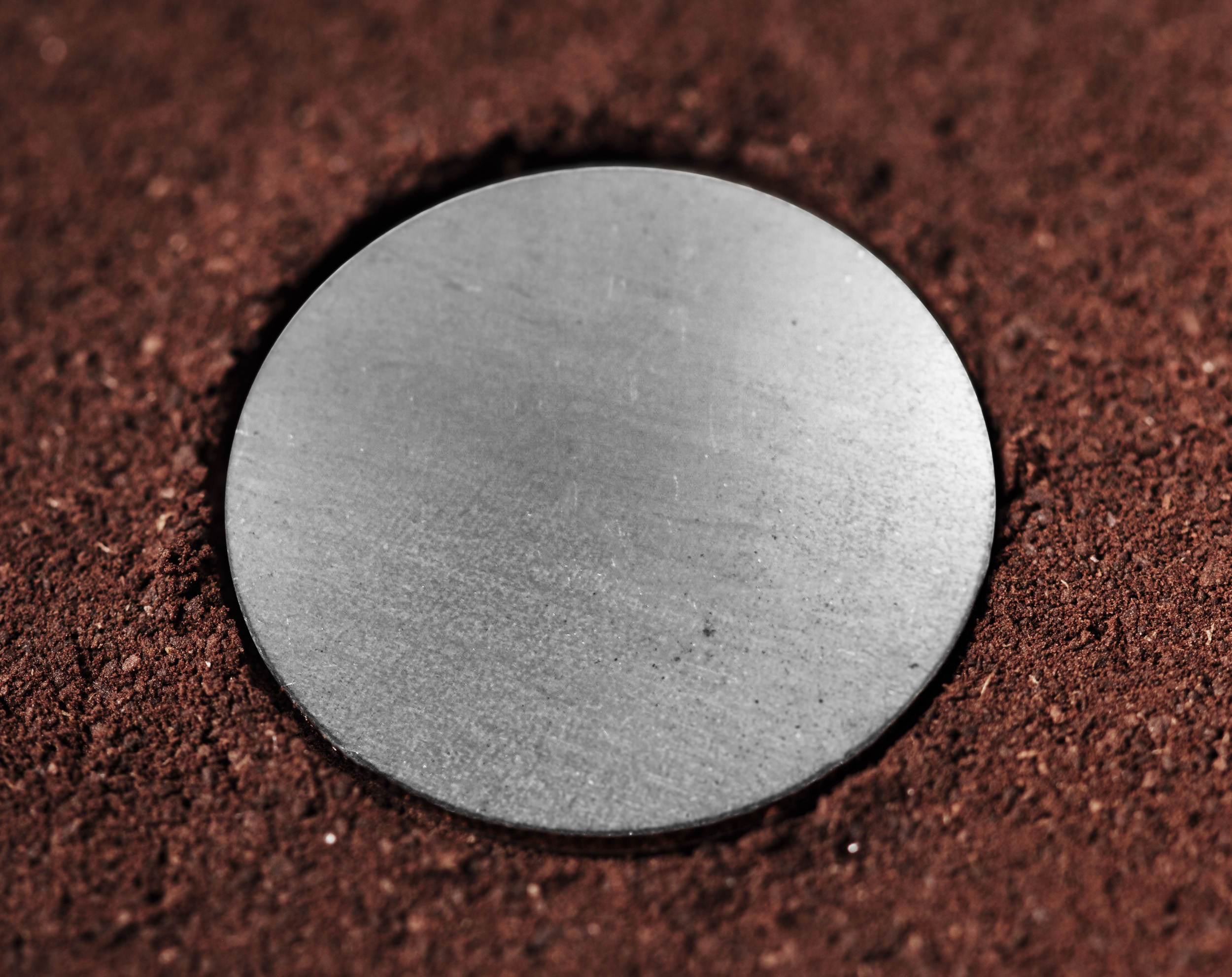 Using a spacer to measure مساحة الرأس is a useful test but we have found no suggestion that 1–2mm is optimum; using a larger مساحة الرأس than that is perfectly feasible, and could help create higher extractions. On the other hand, recent experiments suggest that deliberately limiting the مساحة الرأس can have unexpected benefits to the شعور الفم of a shot.

Changing the مساحة الرأس can be a deliberate choice, or a side effect of changing the dose. If you’re changing the basket to suit your dose as we recommend, then the changes to مساحة الرأس will be fairly small and have only a minor effect on brewing. However, if you don’t have that option — for example if you’re entering a barista competition that stipulates a fixed basket size, or if you just don’t have a basket to match the dose you’re using, then the مساحة الرأس effects could become significant.

ال مساحة الرأس needs to be filled with water before any pressure can build up in the القُرص. While the مساحة الرأس is filling at 0 bars, the القُرص is already starting to absorb water, creating a kind of pre-infusion effect. A bigger مساحة الرأس allows a longer time for the grinds to saturate before full pressure is reached, which could promote higher extraction. This effect also means that in a machine with an adjustable pre-infusion setting, you’ll need to allow extra time to fill the مساحة الرأس before preinfusion is complete.

This effect can be seen in an experiment by Sang-Ho Park, owner of Center Coffee in Korea. He used different sized dispersion blocks to alter the amount of مساحة الرأس without changing any other factors, and found that increasing the مساحة الرأس had effects similar to pre-infusion. It led to a more consistent flow rate in his shots, and also resulted in the flow being slower at the start of the shot, but faster at the end — which is similar to the pattern we see in shots with pre-infusion.

Similarly, an experiment by Socratic Coffee using 20g and 22g basket sizes to change the مساحة الرأس also saw a small (but not statistically significant) increase in extraction, and a lower variation in extraction, with the bigger مساحة الرأس — also similar to what we would expect to see from pre-infusion. One downside of a larger مساحة الرأس is that it leaves you with soggy pucks after brewing. These are messy, but don’t indicate any problems with extraction, so it doesn’t much matter if your مساحة الرأس is large. Reducing the مساحة الرأس will leave you with drier pucks that are easier to clean, but if the مساحة الرأس is too small, then the dispersion screen will not do as good a job of spreading water out over the bed of coffee. The القُرص swells slightly as it begins to absorb water during the early part of a shot, before any pressure builds up in the group (M. Petracco, 2005). If the مساحة الرأس is small, then the القُرص will end up pressed against the dispersion screen. Since water flows out of the screen through a limited number of holes, this could result in dry spots, where water isn’t reaching the القُرص.

Another reason sometimes given for allowing some مساحة الرأس is so that when the القُرص swells, it doesn’t put pressure on the equipment. “During expansion, wet coffee grounds exert a pressure comparable to that of the wooden wedge used in the past to cleave marble blocks,” writes Marino Petracco (2005). Whether this is truly a concern or not, constraining the القُرص does seem to have one interesting and unexpected effect — increasing the body of the shot.

This finding comes from Decent Espresso machine owners, who experimented with putting spacers between the dispersion block and the shower screen. This reduces the مساحة الرأس, without significantly affecting the total amount of space that needs to be filled with water.

Spacers for the Decent Espresso machine reduce the مساحة الرأس without changing the size of the space that needs to be filled with water during preinfusion. Illustration (A) Without the spacer (a), the screen (1) is screwed directly to the block (2). Illustration (B)With the spacer (3) added (b), the screen is much closer to the top of the القُرص.

Using these spacers to reduce مساحة الرأس results in drier pucks, explains John Buckman, the owner of Decent Espresso. “However, extraction comes down by 0.5% to 1.5% and flavor is slightly affected,” he says. “The texture is much thicker, though, so this spacer is likely great for medium to dark roast coffee fans.”

Why limiting the مساحة الرأس has this effect on the texture of the espresso is yet to be determined. “The spacers essentially limit القُرص swelling,” Buckman explains. It seems that constraining the القُرص has some effect on the movement of undissolved solids or oils through the القُرص.

One possible explanation is that constraining the القُرص when it swells traps some of the smaller particles in place, preventing them from moving. When water starts to flow through the القُرص as pressure builds up, the bed consolidates (B. R. Corrochano et al, 2015). Some of this تثبيتها comes from smaller particles becoming mobile, as the water reduces friction between particles, allowing them to settle into place. This means that the particles can pack more tightly together, which gives the espresso القُرص self-filtering properties (Petracco, 2005). We speculate thatPerhaps locking some of the smaller particles in place during pre-wet by constraining the القُرص prevents some later تثبيتها when flow starts, thereby allowing more of the undissolved solids, proteins and oils that contribute to texture to pass through.

Whatever the cause of this phenomenon, our preference at Barista Hustle is for high and even extractions, so we prefer to leave sufficient مساحة الرأس to ensure that the water can flow evenly through the القُرص, and the ‘nickel test’ is as good a way as any to make sure that there’s enough room.